The Fibonacci numbers are a well known recursive sequence, which is defined as followed

The question is, how can we calculate them?

The first idea and probably most intuitive way is recursively. Why? Because the structure of the sequence itself is recursive, which means the implementation will be very similar to our definition.

I’ll chose JavaScript as the implementation language, simply because you can just open the developer console in your browser and paste in the snippets to see the results immediately.

We can simply take our definition, add a little bit of syntax, and voilà, we’re done.

First thing we should test to see if this function actually works.

Everything looks nice, but what if we try to calculate a larger number? What is the largest number that our computer will be able to calculate using this implementation? You might be tempted to figure this out by trial and error, but let’s try calculating this first.

By a very rough estimate, we could say that a modern computer does around 1000 000 000 operations per second. One computer might be 10 or 100 times faster than another computer, but that won’t really bother us, since the end result will be the same.

To get any reasonable estimate, we should first figure out the algorithmic complexity of our little function. At first it seems it should be linear, since to calculate fib(20) you only need fib(19) and fib(18), and so on. Except that fib(19) will calculate fib(18) again. We can see this more easily by visualizing it as a tree: 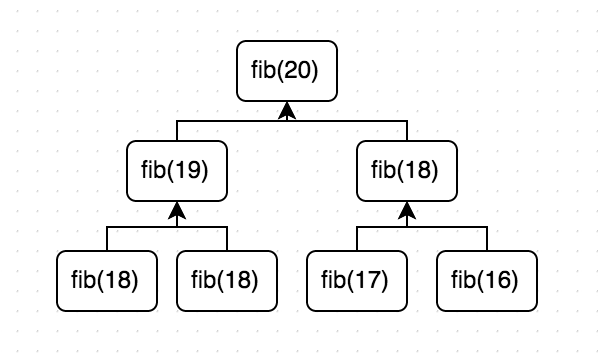 As you can see, we’re calling fib(n) multiple times for the same input. Specifically, the height of the tree will be n, since the calculated value decreases by 1 on each level. If this was a balanced binary tree, we could easily conclude that it has an exponential number of nodes, 2n to be specific, but you can already see that one of the two branches will have fewer children. How many exactly? Let’s use a bit of math.

We can use the same exact formula for calculating the number of nodes, since:

At this point we can see that the Fibonacci numbers grow exponentially, and so will the number of nodes in the computation tree for our naive recursive implementation.

This is where the problem comes, since a binary tree of height n will have O(2n) nodes, meaning our complexity is exponential (even though the real complexity is something like O(1.6n), it is still exponential.)

We can already see that this algorithm is clearly bad and wouldn’t be very practical in real life (if you ever needed Fibonacci numbers in real life.), so let’s try to improve it.

It feels as if the algorithm should be linear. I bet that if someone asked you to calculate the first 20 Fibonacci numbers on paper, you’d start with 0 and 1, and then just iterate forward.

Ideally we’d like to keep our simple recursive implementation while improving the performance to a point where it’s comparable to an iterative solution (in terms of speed.) Earlier we established that the main bottleneck lies in the repetitive computations.

We’ll use dynamic programming to fix this, which basically introduces a cache (or a memoization mechanism, also called a dynamic programming table) which is used to store the intermediary result. Once we compute a number for a specific parameter, we’ll store it in the table and never compute it again. This way we only need to compute each number once, landing at linear time complexity.

Note that we don’t need to resize the array to fit the values. This is only possible due to JavaScript’s array implementation, which behaves a lot more like hash-maps than like arrays.

While we did speed up the algorithm significantly, we also traded computation time for memory, as computing fib(N) will require a table of size N to store the intermediate results. Before optimizing this further, we can look at one more dynamic programming solution.

In general there are two ways to approach dynamic programming. One is top-down, which is what we’ve done in the previous example, and the second one is bottom-up, which is shown in the next snippet.

Highlighting the differences between top-down and bottom-up:

Regardless of which approach you chose, it still uses O(N) memory. While this is not ideal if you just want to compute a single value, having the table pre-computed might come in very handy if you’re calling the function often to get different Fibonacci numbers. I’ll leave it as an exercise to the reader to modify the bottom-up approach to remember the cached values between the calls, and only compute the needed part of the table, such that calling fib(10) and then fib(15) would compute the first 10 Fibonacci numbers only once.

Last but not least, we can get rid of the memoization table, and only compute the n-th number. This is rather easy by modifying the bottom-up dynamic programming approach.

The advantage of this approach is that we get the best of both worlds. The algorithm runs in linear time and consumes only a constant amount of memory, and there’s no recursion, so we don’t have to worry about stack-limit-exceeded types of errors.

In conclusion, there’s no single best solution, and you should pick one based on your use case. While Fibonacci numbers are a very simple example, you can already see that there are multiple approaches to the same problem, without a clear winner.